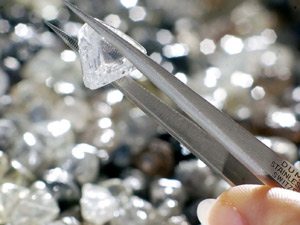 [miningmx.com] – ONE of the key early messages of Mark Cutifani, the
newly appointed CEO of Anglo American, is that the firm’s peer group is not as
“diversified’ as it once was.

He is referring to the likes of BHP Billiton and Rio Tinto, the mining houses that attract
investment based on the diversity of their earnings. Unlike pure play mining stocks,
the big companies offer investors stability through the often choppy investment cycle.

Given China’s near-insatiable demand for steel-feed products, required to complete billions of dollars of infrastructure development, the search for iron ore resources has been a key element of the last ten years in the resources commodities bull market.

Anglo, too, has iron ore exposure. Yet, remarks Cutifani, the company has important
differentiators, including late stage of the cycle products such as platinum and
diamonds. Seen through this lens, the health of the De Beers business is going to be an important constituent to the ability of Anglo to prosper at the expense of its rivals.

Des Kilalea, an analyst for RBC Capital Markets, points out in a recent report that
Anglo American’s operating net asset value in the 2014 financial year of a forecast
$55.9bn is likely to be led by copper production, comprising 21% of the pie.

Crucially, the next important constituent will be diamonds (20%) and coal (20%). The
sudden emergence of the diamond market to Anglo’s business case is partly owing to
Cutifani’s predecessor, Cynthia Carroll, who bought the 40% stake in De Beers owned
by the Oppenheimer family, a $5.2bn deal completed in 2011.

Philippe Mellier, De Beers CEO for nearly two years, said he learned a lot from Nicky
Oppenheimer. But it was a short “apprenticeship’ with Oppenheimer & Sons announcing
their decision to sell its De Beers stake four months after Mellier was appointed.

Now there’s talk the Oppenheimers will move back into the diamond business once a
restraint of trade is served. “We welcome competition,’ says Mellier of a potential
threat posed by the Oppenheimers. “In fact, they are just next door,’ he says of
offices held by Oppenheimer & Son on Charterhouse Street not far from the financial
district of London.

The growing importance of diamonds to Anglo, however, is good news for Mellier.

He’s untroubled by the prospect of closer attention, especially from a company toiling under the pressures of a public listing. Mellier himself hails from the European automative industry having held down senior positions at Renault and Ford. “Anglo respects De Beers. That is the difference,’ he says.

Says David Prager, global head of De Beers’ corporate affairs: “We are a significant
contributor to Anglo. It’s interesting that it was only after becoming a larger part of
Anglo, that the $2bn committed for the underground expansion of Venetia (in SA’s
Limpopo province) was granted,’ he says. “Undoubtedly Anglo has demonstrated a
belief in diamonds and a willingness to invest.’

And invest it must. The departure of BHP Billiton and Rio Tinto from the diamond
market is a signal that De Beers and its Russian rival, Alrosa, stand alone as market
leaders. There’s also the growing realisation that diamonds are becoming increasingly hard to find.

“In the medium to longer term, the supply/demand dynamic within the diamond
market becomes more compelling and De Beers is in a solid position to meet demand
for rough [unpolished diamonds],’ said Kilalea. For instance, De Beers will add 95
million carats at its Botswana mine Jwaneng through the new Cut 8 project, while the
extension of Venetia to 2042 and the development of the Gahcho Kue mine will add a
combined 100 million carats.

Says Prager: “As consumer demand continues to grow diamond production will only
plateau. What then happens, there will be a supply to demand gap which will put
upward pressure on price.

“If consumers are paying more they will demand more from the purchase.
Undoubtedly the future is bright but it’s who captures that future, especially for the
new generation of users’.

De Beers is trying to find new ways of capturing fresh generations of consumers. One
was the “virtual try-on’ as CEO of De Beers’ Forevermark business unit, Stephen
Lussier, described it, where a piece of diamond jewellery can be tested online. To be
honest the process seems unwieldy compared with just walking into a store, but
Lussier said it “. breaks down fears about entering the store’. The online campaign
had most success in the Far East.

New marketing campaigns are in the pipeline. “We’ve got something coming. It’s
great. It’s fun,’ says Lussier who predictably won’t say a thing more about it.

He is, however, poignant that diamonds continue to find a market in the teeth of
global economic difficulties. “You have to shake your head sometimes. The luxury
business remains vibrant. How does that happen given the macro-economic
issues?’

“But we have been able to democratise luxury and now it is a challenge to maintain
our market share. This we do by differentiating diamonds from other luxury goods
because of the emotional attachment. If you get a diamond it’s because somebody
loves you.’