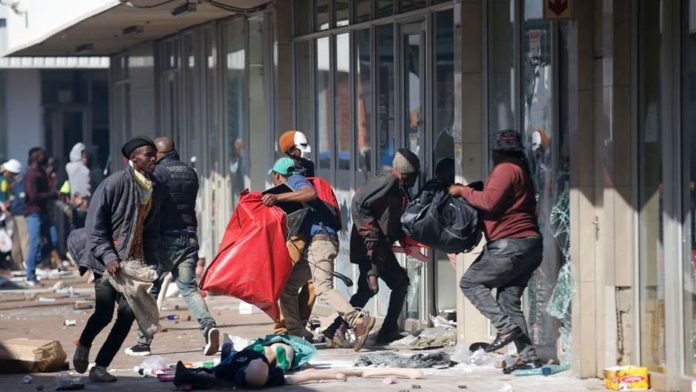 SOUTH African mining companies say their investment case has been battered by the violent looting in KwaZulu-Natal and Gauteng provinces between July 12 and 16, but the long-term impact may be limited.

“There has been damage to our equity investment case,” said Errol Smart, CEO of Orion Minerals, a company developing the R4.8bn Prieska Copper-Zinc project in South Africa’s Northern Province. “That hurts. To recover that is going to be difficult.”

Shares in Orion Minerals are 10% weaker this month with most of the decline starting from July 7, the day of former president Jacob Zuma’s incarceration in the Estcourt Correctional Centre in KwaZulu-Natal where most of the ‘protests’ occurred. So far, 212 people have died as a result of attacks on retail centres and industrial facilities.

The events as they played out on TV screens globally smack of an “unholy trinity” of want, criminality, and opportunistic politics, says Smart.

Thankfully, neither company is concerned the midwinter ructions will hamper R7bn+ in the combined project funding they require. Development investment funding is being set up for Prieska Copper-Zinc Project whilst Pan African’s R1.2bn Egoli mine, and an as-yet-unspecified Mintails project west of Johannesburg will be funded from cash flow.

Similarly, R6.3bn in investment recently laid out by Sibanye-Stillwater will be financed using internal resources. “We’re in the fortunate position that we’re making lots of money,” said James Wellsted, spokesperson for the gold and platinum group metals producer.

Although the protests will add to the giant-size blot on the South African sovereign ledger, mining projects tend to find a way through the crisis. It takes more than a localised, mini-coup to knock mines off their stride as has been amply demonstrated throughout Africa.

Hundreds of deaths and violent attacks in West Africa, including jihadist terrorist attacks in Burkina Faso and a coup in Mali in the last 18 months, don’t dissuade resources investors if the market is incentivising minerals production in a region that is mineral-rich.

West Africa has attracted the most gold exploration spend after North America and Australia and consequently has been host to an estimated 79 million ounces in new discoveries in the past decade, the most globally, according to S&P Market Intelligence. Six of the world’s largest gold producers by market capitalisation have a presence in the region.

In South Africa, the localised nature of the protests is also understood. It’s just over 1,000 kilometres – about a ten hour car drive – from Orion’s project in Prieska to Durban, the epicentre of the protests.

One unknown question, however, is how the South African government will develop policy given the shock of the last week. One risk is that President Cyril Ramaphosa’s government’s pragmatic, reform-orientated approach to the economy might be disrupted by pressure from the idealogues.

“We think the RETs [radical economic transformation] guys have now played their hand,” said Wellstead of the ANC faction loyal to Zuma. “What needs to come out of this is to generate investment and create jobs.”

Sibanye-Stillwater, which has identified billions of rands in other projects, thinks the government needs only look at the R140bn it collected in surplus tax last year. “That came from mining,” says Wellsted.