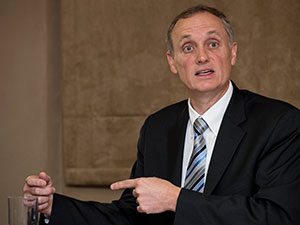 [miningmx.com] – IMPALA Platinum (Implats) is to stage a complete re-think of its safety standards and procedures after throwing R1bn at improving them since the arrival of CEO, Terence Goodlace just over four years ago.

This follows a fire at the Lease Area 14 shaft in Rustenburg which resulted in the death of four employees and also cost the company 50,000 ounces in production this year. A series of other incidents occurred at Rustenburg and Mimosa in the interim period under review and in the current half of the financial year.

Two fatal incidents occurred before the close of the reporting period, one at Impala Rustenburg and another at Mimosa.

Following the end of the reporting period, the group experienced three incidents: two at Impala Rustenburg and one at Mimosa. The underground fire at 14 shaft then occurred on January 22.

A week later the Department of Mineral Resources (DMR) reported safety statistics for South African mining in 2015 that showed some 77 fatalities – the lowest number of deaths while mining since the dawn of the industry.

Goodlace described the events as “devastating” adding that efforts were being put in to impose ‘zero-harm’ at all operations “… to stop these tragic incidents, once and for all”. Safety remained “… a significant challenge for us”, he added.

It was the events at Implats’ Rustenburg operations in December that are thought to have prompted the North West province office of the DMR to order a blanket suspension of platinum mining in the region. The order was not imposed following intervention by mining bosses, however.

The economic impact of the fire at 14 shaft, in particular, is the loss of at least 50,000 ounces of production in the current financial year which will also interrupt the build-up over the next two years of the mine, said Implats.

Thereafter, the previous guidance of building up to 830 000 platinum oz a year “remains unchanged”, the group said.

Implats halted production at 14 shaft following the fire and said today it aimed to recommission portions of the affected bottom section of the shaft with the shaft being fully recommissioned by July 2017.

Gross refined platinum production in the six months came in at 692,000 oz – of which the Lease Area contributes about half – compared to 631,000 oz in the corresponding period of the previous financial year.

Goodlace was commenting in the group’s interim results announcement for the six months ended December 31 in which Implats posted a 13% decline in headline earnings to R347m largely owing to a 15% decline in the rand-denominated basket of platinum group metals (PGM).

Headline share earnings for the half year came in at 53 cents per share which compares to 66c/share in the corresponding period of the previous financial year.
Implats raised R4bn in an equity raising during the period which it said it would use to complete the new 16 and 20 shaft complexes at Impala Rustenburg. However, it said at the time there would be curtailments that would reduce capital spend to R4.2bn in 2016.

It added today, that a further capital saving would be made this year at 17 shaft while the capital bill overall at the company would be reduced by R280m for the 2016 and 2017 financial years. Of the planned R1.6bn in planned capital savings this year, some R510m had been achieved to date.

Analysts focused on the cut to production guidance at the Lease Area. “We think the market will be disappointed,” said Kane Slutzkin, an analyst for UBS.