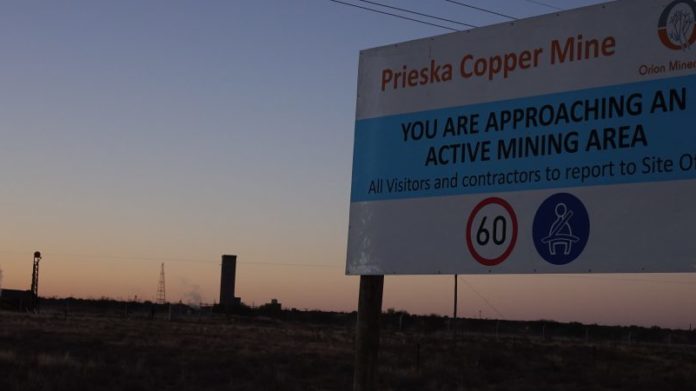 ORION Minerals had seen “very positive early indications” that it could lower the R3.8bn capital cost of its Prieska Copper project as it worked through an optimisation study, said the firm’s chairman, Denis Waddell.

Waddell was commenting in an announcement which primarily was issued to confirm the company had raised A$5.5m (R55m) by selling shares.

Some A$5.5m shares had been sold to professional investors, including its 24% shareholder, Tembo Capital Markets, which protected its investment by subscribing for shares. Some A$2m in stock will be extended to smaller investors.

Waddell said continued shareholder support boded well for the company especially as there was also a chance the project could be accelerated.

“Optimisation study work is producing very positive early indications for potential reduction in project capital and the possibility of bringing production forward,” said Waddell. “An update on ongoing work will be provided in the near term,” he said.

The optimisation study is a precursor for raising capital. About two-thirds of the project is expected to be debt financed, according to comments made by Errol Smart, MD of Orion in April. The balance would be equity financed and could consist of a streaming or forward sale structure, although Smart was cautious of over-committing “… because those things can be difficult to manage”.

The Prieska Copper Project is a strategically important venture assuming analysts are right about the centrality of copper as the world moves to a net carbon world.

But perhaps one the largest compliments paid to the project so far was the investment by Safika Resources, the company owned by Saki Macozoma, which will take a 44.72% stake in Prieska Resources, the black economic empowerment vehicle for the project.

According to Paul Gait, an analyst at Bernstein, the expected tripling in wind farm capacity from the current 600GW in output in the next decade equates to 330,000 tons of new copper demand a year, at a 9% compound average growth rate over the next 10 years.

“In other words, we should be expecting almost one million tons per annum of incremental copper demand coming from wind power alone in 2029,” said Gait in the report.

Waddell said the funds raised will be used to complete the optimisation study on Prieska Copper as well as start project early works. The finance would also enable Orion to embark on the all important “financing negotiations”, he said.