GEMFIELDS confirmed it was set for best ever emerald sales from its Zambia mine, Kagem following nearly three weeks of auctions from August to September. Revenue of $32.9m was generated over the period.

“The results announced today confirm once again that 2022 is the strongest year on record for Zambian emeralds mined at the Kagem emerald mine,” said Adrian Banks, MD of product and sale at Gemfields.

An average sales price of $9.01 per carat was achieved, the second highest figure ever achieved at a Kagem commercial quality auction, the company said. Of 34 lots, 33 were sold. Some 44 companies submitted bids, it added.

“We are very much graduating from a junior miner to a mid-level miner both in terms of scale of mining and revenues. We’ve very recently gone through $250m in revenue, and we’re keen to grow that,” said Sean Gilbertson, CEO of Gemfields earlier this year.

On a 12 month basis, shares in the company have gained nearly 29%. It is currently capitalised in Johannesburg at R4.14bn.

In March, Gemfields declared a maiden dividend of 1.7 US cents (about 25 South African cents) for the year to end December 2021 after what Gilbertson described as an “annus mirabilis” following the dreadful events of 2020 where Gemfields was forced to warn shareholders over threats to its “going concern” status. 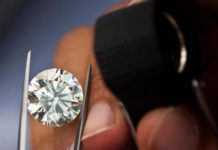