LUCARA Diamonds wanted a quick resolution to diamond sales contract negotiations between Botswana and De Beers as their two-year discussions were “hugely distracting” to the southern African country’s government.

“We are hopeful those negotiations will conclude in the short term,” said Eira Thomas, CEO of Lucara Diamonds. “We would like to see a long term relationship.”

Botswana’s talks with De Beers have been under way since 2020 when the previous sales agreement lapsed, and was then extended to June 2023. The agrreement governs the terms of sales to Debswana Diamond Company, a joint venture between the two. Thomas was commenting in the firm’s third quarter presentation on Thursday.

Thomas’ comments come after a report in Botswana cited unnamed sources as saying the government wanted to abandon its sales agreement with De Beers in favour of supplying Lucara instead. Thomas said her company “certainly did not endorse any of the messaging in the article”.

“We continue to build and have a strong relationship with the government for our own operations and activities and aspirations. We don’t know where that article came from. No-one is claiming responsibility,” Thomas said.

Botswana’s President, Mokgweetsi Masisi is reported to have described the report as “ludicrous” and “false”.

Lucara owns 100% of Karowe, a 300,000 to 340,000 carats per year diamond mine located in central Botswana 500km north of Gaborone. A $547m project to extend Karowe underground is currently being undertaken by Lucara.

Capital spend on the underground extension of Karowe in its 2023 financial year is expected to total about $100m. The company reported revenue of $49.9m for the three month period and $170.5m in year to date sales. Lucara has targeted sale of $195m to $225m for the 12-months ended December.

The diamond market had softened in recent months amid inflation and a spate of interest rate hikes in the US that are likely to continue. This raises the risk of recession which affects luxury good sales.

“A cautious economic outlook combined with the uncertainty caused by geopolitical events, including the ongoing conflict in Ukraine and continuing implications of the Covid-19 pandemic remain a risk to diamond pricing,” said Lucara in its quarterly report.

“The longer term market fundamentals remain unchanged and positive, however pointing to strong price growth over the next few years as demand is expected to outstrip future supply,” it added. 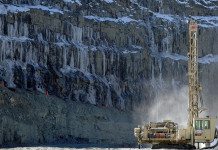