BUSHVELD Minerals has shelved an ambitious R2.3bn plan to take vanadium production from its South African facilities to just over 8,000 tons annually.

Bushveld produces pelletised vanadium – or Nitrovan – from its Vametco facilities situated near Brits in North West province, and grades of oxide from Vanchem, a plant near Emalahleni in Mpumalanga province.

“Bushveld retains the optionality to expand its production to 8,000 tons through a phased expansion plan, subject to securing the necessary funding and meeting its short-term performance targets at 5,000 to 5,400 tons,” said Fortune Mojapelo, CEO of Bushveld in an emailed response to questions.

His statement represents a shift on comments following an expansion feasibility, published in June. In that report, Bushveld placed a caveat on its growth ambitions saying it was conditional on reaching 5,000 to 5,400 tons in annual production. At that time, however, the share price responded negatively falling to a five year low.

Shares in the company have since fallen to a fresh five-year low of just over five pence per share, a decline of about 45% over the period.

Asked about the share price performance, Mojapelo said: “Bushveld’s share price tends to track the vanadium prices, which have softened since July. Also, like most listed stocks we have been subject to stock market volatility”.

The company also announced a structural change, saying it would separate its energy division – Bushveld Energy – which is focused on the downstream battery production business, known as vanadium redox flow batteries (VRFB).

Cash generation is from the sale of vanadium to the steel sector where the mineral is used as a strengthening agent. The battery business, however, speaks to the potential in storing power in large enough quantities to provide baseload energy.

“The carve out will crystallize Bushveld Energy’s value and attract the appropriate institutional investors with a greater understanding of energy and the energy transition,” said Mojapelo.

Bushveld has struggled to meet production targets over the last couple of years but its interim results show signs of it getting to grips with the business. Mojapelo told investors and analysts on Tuesday that as one of only four primary producers of vanadium globally, it would play an increasingly important role supply as battery demand jostled with steel demand.

This was provided the group extended its life of mine as its assets were mature, he acknowledged. He told Miningmx the restructure of the business and focus on nearer-term production targets was not a function of shareholder pressure. 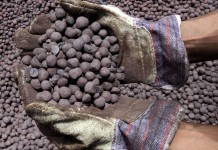