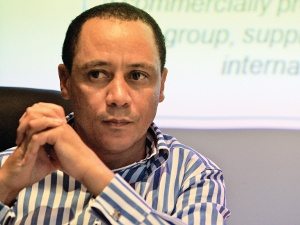 [miningmx.com] – THE Association of Mineworkers & Construction Union (AMCU) has brought new-found momentum in restoring peace and stability on South Africa’s mines to a standstill after it declined to sign a framework agreement binding the sector, unions and government to a behaviour protocol.

The union, which claims the membership of about 60% of workers in South Africa’s platinum sector, and 17% of the gold industry, asked to take an updated agreement back to its members for further consideration.

Speaking to Talk Radio 702, Mike Teke, deputy president of the Chamber of Mines, said he remained confident AMCU would eventually sign the agreement. “The feeling is that they don’t have the type of capacity that other unions have and we are giving them the space to do it,’ he said.

AMCU had signed the Peace and Stability Accord, a precursor of the framework agreement, which was under the auspices of the Department of Mineral Resources on February 28, a fact that boded well for its eventual involvement, said Teke.

“Quite a number of people were disappointed. I am not disappointed,’ said Teke. “Let’s give AMCU that room. Let them come back and they will sign,’ he said, adding that it was crucial AMCU entered wage negotiations from July 8 having agreed a protocol on behaviour.

The framework agreement was signed by all other parties including the National Union of Mineworkers (NUM) and Solidarity with the latter’s general-secretary, Gideon du Plessis, teling Bloomberg News that AMCU had arrived at the signing of the pact in Pretoria with new pre-conditions.

“They came with new pre-conditions that were not raised at the meetings last week,’ said Du Plessis. “They come with bread-and-butter issues but they have entirely unrealistic expectations,’ he told the newswire.

AMCU’s additional demands included the reinstatement of about fired 1,000 workers at a chrome mine owned by Glencore Xstrata, as well as other fired workers at AngloGold Ashanti.

Du Plessis, speaking to Talk Radio 702, said the AMCU had “become the problem”. The industry had gathered to deal with a problem, he said adding: “If AMCU is not prepared to commit, then they are the problem”.

However, South African deputy president, Kgalema Motlanthe, said AMCU’s demands had not played a part in its refusal to sign the Framework agreement.

AMCU was a reluctant member of the draft framework agreement in June; but it eventually played an important role in the updated version of the pact. Teke said the union took a day out on June 28 to form its views.

But it clearly has problems with certain aspects of the framework agreement that may turn on proposals it would not hold an outright control over recognition at mines where it has the majority representation, experts told Miningmx.

“I think the issue with AMCU is that it has won recognition agreements the hard way and now the peace pact is proposing that all unions will have recognition,” said Albert de Beer, an independent industrial relations expert.

“They [AMCU] don’t mind another union having representation, but it needs to be in a controlled way. I think that’s how AMCU has interpreted the peace agreement.”

According to the draft framework agreement, the South African government said it would work with business and labour to “explore various instruments to address any possible unintended constitutional consequences in the application of the majoritarian principle’. This would include “. introducing an instrument in law’, the draft Framework agreement stated.

It also suited AMCU to remain outside the status quo in the labour market, said Claude Baissac, a political risk expert at Eunomix. “The risk to AMCU is that if it too quickly institutionalises, if it normalises, then it harms its value proposition which is to be different to the NUM,” said Baissac.

“There may be some capacity building issues in AMCU, but it has also had great success in just only a war which is a short time. If you are winning the war, why sign a peace pact,” said Baissac.