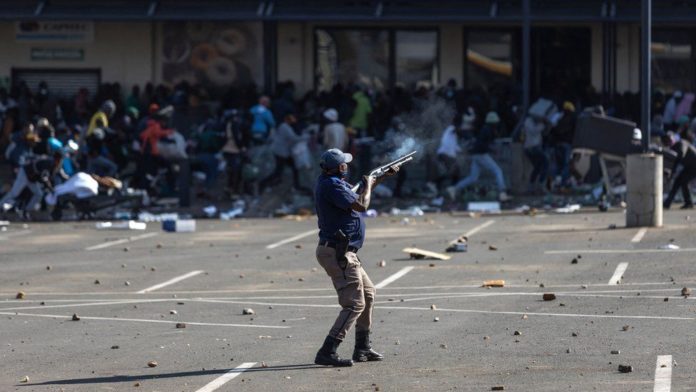 THE violence and looting of retail centres and industrial assets in South Africa over the past three days would result in lasting damage to the country’s investment prospects, said the Minerals Council South Africa.

It also called on the government to protect the country’s infrastructure as military resources were deployed to quell the violence. At least 72 people have lost their lives in the protests, according to a government statement late on Tuesday.

“The Minerals Council South Africa condemns the acts of violence and looting that have been spreading through various parts of the country, particularly KwaZulu-Natal and Gauteng. We are deeply concerned about the loss of life,” the council said.

It added that “… the images of mayhem playing across screens in South Africa and abroad will have a lasting impact in discouraging investment”.

While it supported the deployment of 2,500 soldiers from the South African National Defence Force (SANDF), the council said this should be done “in line with basic human standards” and that it was “critical that key infrastructure be protected”.

There were particular concerns regarding power supply, telecommunications, water, road, and rail which were required to ensure food security and the recovery of the economy.

South Africa’s investment reputation has been damaged over the years by the failure of state institutions and infrastructure, especially the failure of Eskom to provide a reliable power supply coupled with above-inflation electricity tariff increases.

The picture on South Africa’s mines, however, seems relatively peaceful despite the chaos perpetrated in the metropolitan regions of Durban, Johannesburg, and Pretoria. Only a handful of mines – Richards Bay Minerals and MC Mining’s Uitkomst (both in KwaZulu-Natal) – have disrupted. Sapref, an oil refinery in Durban, has also closed down citing the violence that has engulfed the region.

“The concern regarding infrastructure relates to the provision of things like diesel, but the mining communities have been quite separate from the violence. They are also quite well prepared on the security front,” a market source said.