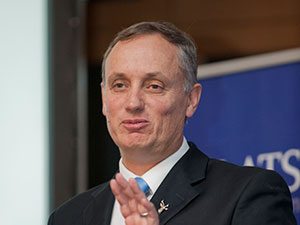 [miningmx.com] – THE mechanisation of mines has become a buzzword in the South African mining sector construed as something of a panacea for investors especially in the platinum sector where estimates suggest two-thirds of production is still cash negative.

According to Chris Griffith, CEO of Anglo American Platinum (Amplats), the Anglo American listed subsidiary, mechanisation is neither quite of these things entirely, although he acknowledges there’s a long-standing debate on the effect of mechanisation and the impact on jobs.

“[I]t is common cause that better productivity is better for the economy,’ said Griffith in a presentation at the Mining Indaba conference earlier this month. “Jobs don’t get lost – they get created in new areas,’ he said, adding that mechanisation was “… a social and economic imperative’.

Tell that to Lonmin shareholders who witnessed the efforts of former CEO, Brad Mills, who pioneered mechanisation from about 2007 at the group’s operations with the intention of taking mining costs down to 35% of total costs from 65% at that time. It failed and cost him his job.

Said Griffith in an interview with Miningmx: “Mechanisation is not universal panacea; sometimes it’s not the solution. At Lonmin, it was at an early stage of mechanisation but we’ve had a long history since then.

“We’ve also had failures where we’ve tried to retrofit mechanisation at conventional mines. So it’s a combination of what we’ve learned on positive and negative things. Where we’ve chosen to mechanise, we’ve had success,’ he said.

Terence Goodlace, CEO of Impala Platinum, is perhaps a tad more sceptical of the mechanisation, at least in respect of the extent to which it can be applied at the firm’s giant Lease Area in Rustenburg.

“We have certain areas open to mechanisation, but it’s not a universal solution,” he said in response to questions at the firm’s interim results earlier this week.

“To throw mechanisation into the equation in totality will not work. We have to look at the total system. At Marula [a mine Impala said it wanted to sell], we have a huge rig that is only operating for three hours a day,” he said.

From an Amplats perspective, the broad intention is to improve productivity three-fold which would be enough to take about 90% of the firm’s production in the first half of the cost-curve, said Griffith.

What’s involved is a number of technological innovations such as user lasers to cut or soften rock in an effort to replacing blasting of rock which is safer and more efficient in that there’s less dilution of the platinum-bearing ore in the waste.

The investment is long overdue.

On a revenue to revenue basis, the mining industry spends 80% less on technology and innovation compared to the petroleum sector even though its operating costs are increasing three times faster than consumer inflation rates and look set to double in less than five years.

“We can’t rely on only small, incremental changes and a business-as-usual philosophy to get us out of this predicament,’ said Griffiths. “Major innovation is exactly what our industry needs to solve its critical challenges.

“In fact, mining needs to leap forward 20 years in the next five’.