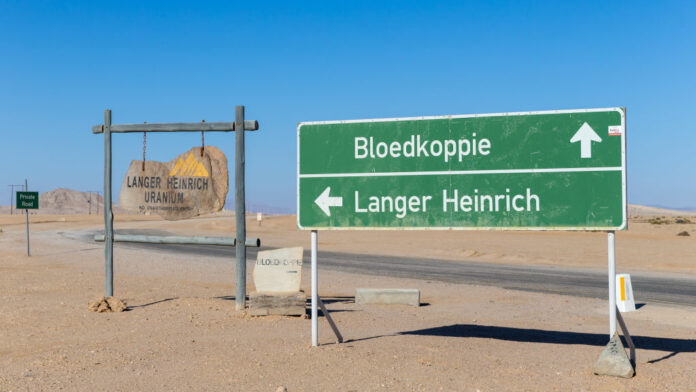 NAMIBIA’S Henrich Langer mine is to restart production in early 2024 some six years after a plummeting uranium oxide price forced its closure.

Paladin Energy said today it decided to reopen the mine after about two years of redevelopment as a result of “… strong uranium market fundamentals”. It had also made progress on its uranium marketing plans.

After trading in a band of $20 and $30 per pound between 2016 and the first quarter of 2020, spot uranium reached $64/lb in April. The improvement is a function of a growing supply deficit. Globally, there are some 57 new nuclear plants under construction and a further 97 planned.

“Things are moving very quickly in our industry, and we’re seeing countries and companies turn to nuclear with an appetite that I’m not sure I’ve ever seen in my four decades in this business,” Tim Gitzel, CEO of Canada’s Cameco which mothballed four of its mines after Japan’s Fukushima disaster, said on a May.

The price has retreated since April but Russia’s invasion of Ukraine has changed the shape of the energy market.

Russia accounts for 35% of global supply of enriched uranium.

Ian Purdy, CEO of Palaldin, said today that the company would spend $117m making the mine production ready – a third higher than the previous capital expenditure forecast.

“The increase in the capital required to restart operations reflects a combination of recent inflationary pressures and the bringing forward of key work packages to ensure the long term reliable supply of power and water to site,” said Ian Purdy, CEO of Paladin.

Labour, equipment and raw materials escalation accounts for about $13.6m of the increased capex while an additional $9.4m would be spent on infrastructure work packages providing water and power.

Paladin said it was “well funded” to reopen the mine. Net cash as of end-June totalled $177.1m. However, CNNC Overseas Uranium Holding, which has a 25% in the mine, was yet to finalise its funding decision, said Paladin.

The mine will operate for 17 years.

The reopening builds Namibia’s position as a significant part of the uranium market. It currently produces uranium from Rossing Uranium Mine and Husab Uranium controlled by Chinese investors, but there are more on the radar.

“There are a number of uranium projects in the pipeline just waiting for the price to recover,” Namibia’s finance minister Ipumbu Shiimi told Bloomberg News in May. “If the price reaches $65-$70 a pound, then that will trigger more investment in uranium.”