AT Davos, the great and the good will be calling the world to embrace a new stakeholder creed. Environment, Social and Governance (ESG) will be at the top of the list, and companies are already looking to respond. Last week, for example, Microsoft and BlackRock each launched environmental plans, and other prominent corporate names will follow suit.

ESG investing is already one of the fastest growing categories for active and passive fund managers. Its level of importance for all stakeholders in mining is rapidly growing in different ways, from investing, to strategic direction, to investor and public relations.

For most mining companies, public disclosure and interpretation is in our view, still relatively weak, but certainly improving.

In a report published at Metals Focus, we have attempted to make key, “apple versus apple”, ESG comparisons on annually presented, public data for the leading gold producing companies; this includes four South African entities.

With public disclosure of some metrics missing entirely or at best confusing to understand, this has not been an easy report to compile. We certainly do not think this analysis is complete, but rather the start of a journey to a better understanding of these companies from an ESG point of view.

Some academic studies have shown a link between share price performance and leading ESG metrics, not least that companies that score better on environmental and social dimensions can trade at a premium relative to their peers. Indeed, it has been rumoured that hedge funds will soon be setting up funds to sell mining companies with poorer ESG scores relative to their peer group competitors.

The report covers all the elements of ESG metrics, as presented by the mining companies, covering: emissions, water, energy, waste, land & biodiversity and health & safety.

In an extract from the report, the graphs we have presented here show the CO²e (Carbon dioxide equivalent) emissions for the peer group for the 2018 calendar year, together with a unitised measure based on the annual gold* production.

All these emissions should be directly comparable.

The pending prospect of global GHG emission taxes makes this metric highly relevant. Typically, carbon pricing refers to initiatives that put an explicit price on GHG emissions, i.e. a price expressed as a value per ton of carbon dioxide equivalent. The social cost of carbon is a measure of the economic harm from those impacts, expressed as the dollar value of the total damages from emitting one tonne of carbon dioxide into the atmosphere. Goals from the Paris Agreement were $40-80t of CO²e by 2020 and $50-100/t by 2030. 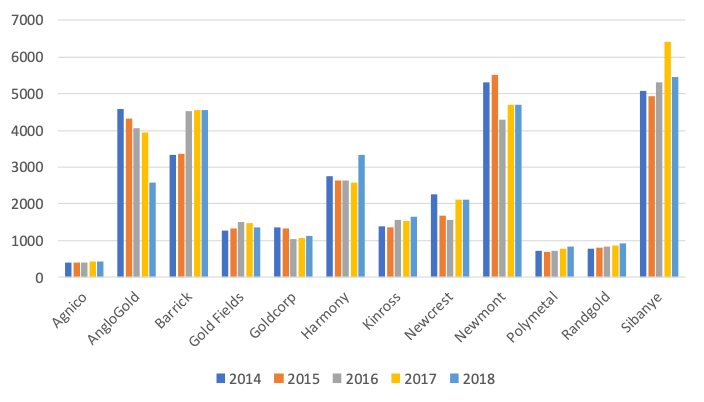 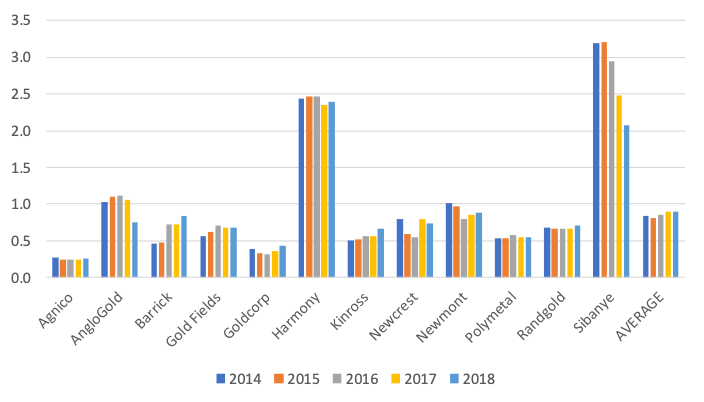 For the peer group, unitised GHG emissions have risen 7% over the last five years.