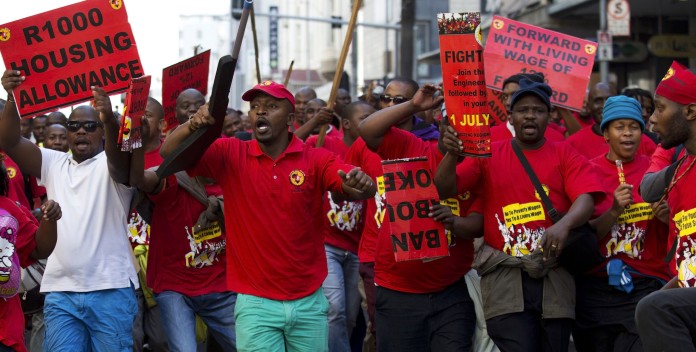 SIBANYE-Stillwater edged closer to a strike at its South African gold operations after failing to agree a three-year wage agreement with a coalition of unions.

“It is disappointing that, while the company has increased its offer five times, the unions have not moved significantly from their initial demands,” said Richard Cox, vice president of the group’s gold division.

“These demands are not sustainable and we will not be intimidated into acceding to above inflation demands that will compromise the sustainability of our gold operations and therefore all our stakeholders,” he said.

Sibanye-Stillwater has produced 812,609 ounces of gold year to date from its three mines Driefontein and Kloof, west of Johannesburg, and Beatrix in the Free State province. However, the gold division has recorded a cash loss in the six months ended June. It contributed only 6% to interim EBITDA ended June 30, with the bulk coming from Sibanye-Stillwater’s platinum group metal (PGM) operations.

Cox said he remained hopeful of a last ditch resolution. In terms of the issue of a non resolution certificate – to be issued by the Commission for Conciliation, Mediation and Arbitration (CCMA) which presided over the recent negotiations – a two week period is allowed to establish picketing rules. The parties will reconvene on December 13 for a final engagement session when a certificate of non-resolution will be issued.

The Labour Relations Act requires parties to provide 48 hours’ notice upon receipt of a certificate of non-resolution before embarking on any form of industrial action.

Sibanye-Stillwater said it had adjusted its wage offer five times during the negotiation process with its last position set at a R570 increase in the first year of the three-year wage proposal for category 4 to 8 employees (including entry level).

All in all, Sibanye-Stillwater said it had offered a total wage and benefits package that would have seen a R1.4bn hike in its overall wage bill by July 2023.

But the sides of far away from each other.

According to the gold producer, the coalition of unions – which includes the Association of Mineworkers & Construction Union (AMCU) and its rival the National Union of Mineworkers – demanded wages equal to a R2.5bn total wage escalation in the third year of the agreement.

This was “… well in excess of inflation and unsustainable”, the company said.

A prolonged strike at the gold mines could put a portion of Sibanye-Stillwater’s gold production in jeopardy. It took the best part of a year to recover from a five month strike called by AMCU in late 2018.

AMCU’s reputation as a hardline union also suffered badly in that strike as it had to accept the original offer agreed with other unions. The coalition stance, however, is intended to present a unified stance although it remains to be seen whether it will hold against the prospect of members returning with their December pay likely to be the last for the foreseeable future.