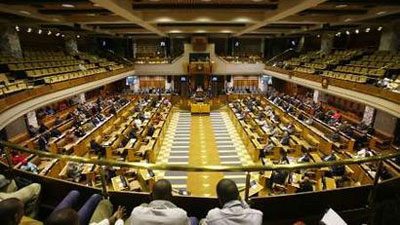 [miningmx.com] – THE Department of Mineral Resources (DMR) intends to have an amended Mining Charter ready by the end of the current financial year on 31 March 2016. Until then the provisions of the current charter will remain intact.

This was announced earlier today when the department’s deputy director-general Mosa Mabuza, briefed parliament on the Mining Charter Assessment Report.

Mabuza added that the DMR plans to extend the sanctions under the Mineral and Petroleum Resources Development Amendment (MPRDA) legislation.

Currently mines, which are non-compliant with the charter, can be fined for a maximum of R500,000, but that is “… hardly a deterrent in an industry where R400bn is generated”, Mabuza said.

“We’re going to align the sanctions with those of the Competition Commission whereby we’ll take 10% of you income – that will be a good deterrent.”

As for the Mining Charter report, the scorecard was based on three non-negotiable matters – reporting, ownership and housing and living conditions, Mabuza said.

The outcome of the report showed that 79% of non-weighted mining right holders (this is an aggregation on the basis that mines of different sizes have equal significance in output – an indication of whether the industry met targets) achieved targets.

A total of 90% of weighted ones (weighing the output in accordance with the size of the mine – larger mines carry more weight than smaller ones) met the 26% ownership target for historically disadvantaged South Africans (HDSA).

“However, when the report is further analysed for meaningful economic participation as required by the Charter only 6,3% of non-weighted and 20% of weighted right holders met the criteria,” Mabuza cautioned.

The department said the report clearly showed that mineworkers and the communities are the least beneficiaries from transformation in the industry – in particular the empowerment transactions.

“The majority of the empowerment transactions, even though they’re above 26%, are not broad-based as dictated in the amended charter of 2010,” Mabuza said, “… and there is limited benefit for historically disadvantaged South African beneficiaries.

“Is the 26% worth the piece of paper it is written on if it’s not translated into the direct benefit for the HDSA beneficiaries – it seems not.

“The DMR elected not to prescribe the mechanism of funding empowerment transactions and that seems to have created loopholes for unsustainable deals.”

During question time Hendrik Schmidt, DA representative in the mining oversight committee, asked Mabuza what the department intends to do with mining companies that do not meet the criteria. “Is it going to be another Glencore situation?

If the minister threatens to cancel mining rights there will be no income stream, which in turn will have an impact on jobs. Mining companies are not the enemy. Why are we making the industry an opponent rather than an ally?

Mabuza asserted that it was the job of the DMR to implement the law. “That’s what we do – we regulate. There’s an impression created sometimes that we need the permission of certain groupings for us to do our job. That’s incorrect.

“We do engage and consult but when it comes to releasing results it’s perhaps going to far to expect from us to get permission from those we regulate to do so.”

He also took issue with Schmidt’s referral to the revocation of mining licences: “It’s incorrect to create the impression that the DMR is on a rampage to take everybody’s rights and licences. When we do it’s because someone was non-compliant and ignored the notice.”

Mabuza also warned mining companies not to “abuse’ the current unfavourable market conditions as a reason not to pay dividends to their shareholders, specifically black economic partners.

“The view overall is that the mining industry is going through a difficult period. But if you take a granular analysis of the industry the picture is different. Look at the price of nickel – it’s on the rise – and we’ve just opened a nickel mine.”