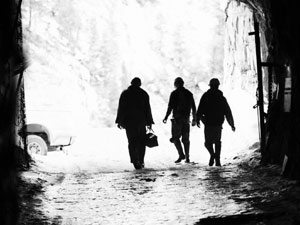 [miningmx.com] – THE spotlight was thrown back on the incendiary nature of union rivalries at Lonmin’s premises in the North West province today with the news that two Lonmin employees were shot, one of them fatally.

It is thought that both employees were prominent members of the National Union of Mineworkers (NUM), a turn of events that will raise the temperature on the mine especially as the Labour Court ruled last week the NUM has until July 16 before it has to close its Lonmin offices.

In the interim, the NUM will be allowed time to win back members from the Associated Mineworkers & Construction Union (Amcu) which is the majority union of category 4 to 9 workers, among the lowest paid on the mine.

Lonmin confirmed last week it had suspended eight NUM members after they were found to have falsified stop orders to make it seem as though Amcu members had left their union and joined, or rejoined, the NUM.

Commenting on the shootings, Lonmin spokesperson, Sue Vey, said the atmosphere on the mine was peaceful. “We have not seen any other incidents of violence or intimidation,” she said.

“Lonmin is appalled and horrified at this senseless violence and we call on all stakeholders – in particular our unions – to exercise the necessary leadership and to be unequivocal in condemning murder and the use of violence,” the company said in a statement today.

The shootings fly in the face of a concerted effort by the South African government and the mining industry to minimise mine violence among rival union members as the unions prepare to begin annual wage negotiations.

Speaking to the House of Traditional Leaders on May 23, President Jacob Zuma commented: “If the workers demand higher wages and that becomes a point of conflict, so sharp a conflict it could produce another Marikana, then there’s something wrong in our society”.

Earlier today, Glencore Xstrata said it has sacked 1,000 workers at three of its chrome mines after embarking on an “illegal strike”.

“About 1,000 of the employees who have participated in the unprotected (illegal) strike have been dismissed,” said Christopher Tsatsawane, a spokesman for the company’s chrome operations.

The strike, which started last Tuesday, was continuing, but supplies to customers were not yet affected, he added. The workers have until Tuesday to appeal the dismissals, Reuters reported.

“Should a widespread labour dispute arise within the forecast horizon, output could contract substantially and business confidence could fall, adversely affecting investment and hiring decisions,” it said in a report.

Earlier today, Coal of Africa said it was likely to close its Mooiplaats colliery in Mpumalanga province after the operation racked up losses of just over R400m in two years. About 548 people are employed at the mine.