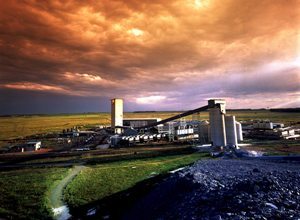 Despite a gold price that has moved some 32% higher over the past five years, share prices of most senior gold mining companies have collapsed.

Kinross’s share price is down an incredible 80% over that time period. By contrast Randgold Resources is up 24% and one of very few gold mining companies to register an increase.

Dividends have come nowhere near to filling the shortfall. The only metric that has risen consistently is debt which is now at an all-time high. This is especially noteworthy considering that the gold price is now trending lower.

The hubris of gold mining companies began building steadily from about 2005, reaching a peak with the gold price in 2011.

During this period, “group-think’ suggested the price would continue rising forever, driven by growth in developing economies. This single point of view was probably the cornerstone of most of the mistakes that followed, a one-eyed view of the gold price.

Harbouring an alternative view within a mining company was considered heresy. The long term trend might well be upward, but what gold mining companies failed to consider was the cycles.

So where did it go wrong and what lessons have been learnt?

It is not the purpose of this article to use the benefit of hindsight to bash gold mining companies; that would be too easy.

Rather, it is to discuss some basic key drivers that could create an improved business model, able to finally generate some risk-adjusted returns for long suffering equity shareholders.

Boasting about production increases became the norm for most gold mining companies, cheered on by all those with a vested interest in scale: mining consultants and banks, and, it must be said, aided and abetted by investors.

Chasing volume increases was foolhardy and expensive, leading to some terrible decisions and diverting attention away from other far more important areas.

Strategically, senior gold mining companies should strive to lower the cost of production and for simplification. It should focus on the quality of production, not the quantity and the ability for the portfolio to generate cash after all costs (including tax).

Mining assets should be marked for the consistency of production, a real test of quality. Individual mine managers should be the best paid employees in the firm, measured on the delivery to the plan.

Simplification is under-rated. The real cost of managing a complex portfolio is rarely properly understood by management.

Multiple layers of duplicity are created where unde-rperformance can hide, leading to the assets running in a perpetual, sub-optimal state. A simple test is to ask the CEO how many times he/she has visited each site in the last year.

Understanding the real cost of production is another important area requiring a re-think by producers and investors.

The work of the World Gold Council has certainly improved the situation although it still leaves too much open for interpretation.

For many years, the ability of gold companies to generate cash has been particularly weak, a clear indication that the true cost of production is very high and that the profit margins low.

Capital allocation takes many forms, the most significant being the investment in greenfield or brownfield projects.

Misallocation of capital for mining companies only tends to come to light when commodity prices fall. This aspect of allocation has for the most part, gone horribly wrong over the past few years, with most recent investments now offering well below the required rates of return.

Since the gold price began falling from its peak in mid-2011, gold mining companies have impaired assets by some $30bn. This is the revaluation of assets under lower gold price assumptions, but is reflective on the quality of investments made.

Even before considering the variability of cost and revenue factors, mining by its nature is an uncertain business, with variable geology and mining conditions.

However, most mining companies have compounded the effect of these variables by adjusting a key component through all development phases – the gold price!

Indeed, as projects deteriorated, a tweak of the gold price soon put any doubters in their place and lifted expected returns.

A consistent and transparent gold price scenario, well below peak prices, needs to be used for new project planning and current production.

From 2005 to its peak in 2011, most companies increased the gold price used for planning purposes. This led to the approval of marginal projects and just as importantly, the mining of lower grade material (rarely included in the original plans) to extend the life of the asset, but at a higher cost.

Creating the gold price scenario used for planning at an annual discussion event, where “group-think’ takes over and people with negative views tend to be ostracised, is a formula for failure.

Misallocation of capital is not just about spending badly on projects, it is buying poorly and in particular, not selling.

Indeed, when commodity prices are rising, the fear of selling an asset to a third party who might just make a better success of managing that asset is overwhelming and a perfect reason never to sell.

Nobody ever got fired for not selling an asset! Big companies should focus on mines that are high quality, low cost with a mining life of at least five years. If it doesn’t fit the criteria, sell it.

Gold mining companies need to be very careful with debt. The degree and the speed through which key variables can change is so great that borrowing heavily can be risky.

There is little diversity amongst the cost drivers included within a gold mining company, the key variables tend to move in unison so costs can lift (or drop) across the whole portfolio simultaneously.

Also, a new gold mine typically has a life-of-mine of about 10 years (much shorter than a new base metal mine), too short to sustain debt repayments for a longer term loan. If debt is to be used, it should be minimal and for short term project finance.

And finally, the other advantage to conservative gearing is the opportunities it may release when the industry enters a cyclical downturn.

This is the time to buy quality assets at reasonable prices. Most of the so-called leading gold mining companies are now sellers of assets because of the high debt levels, growing the bargain basement.

Few would disagree that the level of pay for senior gold mining executives is excessive for the level of value that has been created.

Investors should look at two things here; the make-up of the salary package for the most senior managers and the number of executives sitting on the main committee.

The fixed cash component of the salary package should be small in relation to the overall remuneration package, with the remainder made up of incentives not linked to the gold price.

That means excluding ore reserve regeneration (too easily manipulated) and earnings, and focusing on production, productivity, real cash cost metrics and balance sheet which is the stuff that can be managed.

It is also far more beneficial to see some proper exposure to the share price for the CEO and CFO managers, with lock-ins.

The size of the executive committee needs to be watched too. Generally, senior management teams look after themselves very well indeed, but the jam has been spread far too liberally.

Safety has been introduced into the investment environment. Apart from the obvious moral obligations, it is used by investors as a measure of operational efficiency.

It is true that more efficient, higher quality operations have the better safety records. But most investors don’t have a clue about safety metrics or what they really mean.

Gold mining companies should consider setting up a quango to monitor safety standards and communicate findings to investors. Safety might then be taken more seriously by investors rather than to pique their curiosity.

The net result should be a highly cash generative company at the top of the commodity cycle, able to pay significant dividends with a positive gearing to the gold price and able to reinvest for sustainability through acquisitions or greenfield development.

Randgold Resources presents a compelling case on most of these metrics, although it is yet to pay significant dividends.

It’s a wonder other companies have been so slow to learn from its example; Randgold has been by far the most successful senior gold mining company, measured by its share price.

If there is restructuring ahead for the gold sector, it should be about creating companies along these lines. If it isn’t, it’s probably rehashing an old, failed business model.

Michael Bedford CFA is co-founder of WoodHill Asset Management and acts as a consultant to Metals Focus. Previously, he was a Senior Vice President for Business Planning and Vice President for Investor Relations at AngloGold Ashanti and before that, a senior mining analyst with Barnard Jacobs Mellet.