IN this review, I argue that the quantum of vaulted above-ground palladium stocks will continue to be a drawn upon to supply the market with additional metal, at a price. Notwithstanding, the market expects the palladium deficit to widen going forward.

Vaulted palladium stocks are, however, finite and, in my view, the draw-down of these stocks has entered a “time-limited zone” and will likely “run on empty” within two to four years. In this regard, the palladium price is likely to continue its upward trend.

Given this scenario, I am of the view that it will become an imperative for the industry to advance its current timeline significantly for the introduction of new drive-chain technologies: electric, fuel cells, hybrid vehicles, the recovery of autocatalyst recycling and platinum substitution for palladium in the emission catalytic converter fitted to petrol-powered vehicles.

Turning to platinum, a different set of circumstances is at play despite a relatively large quantum of vaulted stocks. My calculations imply that platinum stocks are geographically and unevenly distributed between regions: Europe’s stock is depleting, Japan is low on stock, while China and North America have built up stock. Furthermore, the above-ground stock in China is not globally mobile.

In this scenario, I am of the view that vaulted above-ground platinum stocks in Europe have also entered a time-limited zone and will likely run on empty within two to five years. My data implies that Europe will likely have to draw metal, mainly from North American vaulted above-ground platinum stocks, at a price. Under these circumstances, I expect to see upward pressure on the platinum price. Much, however, depends on a continuous uptick in demand.

Continuing the discussion on palladium, over the past seven years industry statistics show that palladium exhibited a continuous net deficit in the supply-and-demand balance. I calculate from published data that the average annual deficit between 2012 and 2018 amounts to c. -830,000 ounces and in total to c. -5.8 million oz from 2018 (JM, GFMS).

The market expects that the deficit will likely widen and continue its relentless decline ceteris paribus: given the onset of tighter vehicle emissions standards, which will require a significant increase in autocatalyst loadings, and concerns regarding a likely decline in palladium production from South African operations.

Clearly, the PGM market and financial markets have been reacting to the imbalance in palladium supply and to a tightness in the market due mainly to the lack of available physical metal to short in the classic manner, by forcing upward pressure on the palladium price. The palladium price rose year on year by c.18% in 2018 to $1,028/oz, as at 14 February 2019 it was trading at around $1,405/oz, which is a price premium over platinum of around $619oz.

It is interesting to note that platinum over approximately the same period has also exhibited a long-term net deficit in the supply and demand balance. I calculate from published data that the average annual deficit from 2012 to 2018 amounts to approximately to -400,000 oz and in total to some -2.5 million oz. (JM, GFMS)

Plainly, this situation is incongruent and flies against all financial norms. Financial markets are unlikely to misprice these metals ceteris paribus.

In my view, some of the published data about underground stocks is likely to cause a certain amount of confusion and ambiguity in the industry (particularly for miners, refiners, manufacturers and investors) when attempting to draw conclusions from the relationship between above-ground stocks and metal balance derived from supply-and-demand equations.

It is important to note that vaulted stocks are finite and in time will ultimately be unable to top-up metal supply in an environment of an increase in demand and price.

The scenario presented at the low end of the quantum estimate of above-ground stocks sends a positive message to the industry that an increase in demand would likely put upward pressure on the price as platinum stocks are near to being depleted ceteris paribus. Conversely, the scenario presented at the higher end of the quantum of the platinum stock scale presents a negative message to the industry as the estimated stocks are large and the investment case for platinum becomes a risk.

It is important to note that vaulted stocks are finite and in time will ultimately be unable to top-up metal supply in an environment of an increase in demand and price. I argue that the geographic location and mobility of vaulted stocks is an important factor when considering the metal’s supply life and price.

The industry provides important and valuable supply and demand statistics. The wealth of this information is used, among others, to support strategic planning scenarios; for example, to support future estimates of the palladium and platinum price.

I argue, however, that this data is incomplete; furthermore, the PGM industry is mainly silent on one of the most important aspects of supply in the supply-and-demand equation: the quantum of vaulted above-ground stocks.

There are a number of key questions that need to be answered surrounding vaulted
above-ground stocks of palladium and platinum, among these are:

Answers to these questions will, in my view, provide important information to take into account when forecasting market trends and the future price and availability of palladium and platinum.

My research seeks to unravel this conundrum by attempting to provide historical trends and estimates of vaulted above-ground stocks globally and by region between 1993 and 2018 for China, North America, Japan, Europe and the Rest of the World. To estimate the quantum of stocks, my calculations attempt to integrate metal import and export data derived from audited trade data with published demand statistics (JM, GFMS). Note that this exercise required huge amounts data analysis and auditing.

I note that JM, in its PGM market report released in February 2019 commented on the continuing and widening shortage of metal in the market. JM presented figures that support this decline by indicating that since 2007 around 11.5 million oz of palladium has been withdrawn from inventories in the UK and Switzerland. My figures show the same rate of decline (to nearest 0.5 million oz) to the figure JM reported which, in my view, adds credence to my data base.

My research implies that the estimated vaulted above-ground global palladium stocks were around c.14.7 million oz at the end of 2018. This figure is, however, leading as it implies that this stock is located in a single vault and is not geographically dispersed. Under these circumstances, the availability of vaulted stocks to the market is likely to be overestimated without knowing their regional distribution and mobility.

Detailed analysis of my data, represented graphically below (Figure 1), reflects the estimated historic regional trends of the quantum of vaulted above-ground stocks for palladium. I note that the regional vaulted underground palladium stocks started to decline continuously since 2003. This decline started to accelerate between 2009 and 2012 and remains at this rateto date (with the exception of the vaulted stocks in Japan).

In my view, these regional stocks have entered a time-limited zone. This means that stocks will likely run on empty within two to four years. In this regard, the palladium price will likely remain high and continue to trend upward ceteris paribus. 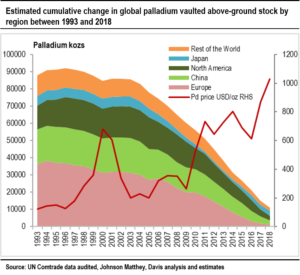 Turning to platinum, a detailed analysis of my data, represented graphically below, implies that the estimated vaulted above-ground global platinum stock was around 23.6moz at the end of 2018. I note that that my estimate of vaulted above-ground global platinum stock has been and still is large despite being in general decline since 1993 (Figure 2). 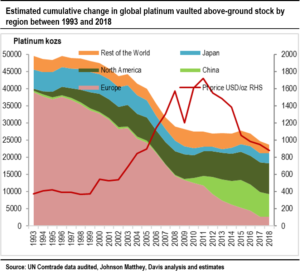 I note that platinum vaulted stocks are unevenly distributed between regions: In Europe stocks are low at c. 2.6 million oz, in Japan stocks are around c. 3.0 million oz, while China and North America have built up stocks to around c. 6.7 million oz and c. 8.9 million oz respectively. The rest of the world declined to c. 2.4 million oz. Note, the above-ground inventory in China is not globally mobile.

The continued decline in the vaulted above-ground platinum stock in Europe may be regarded as the Achilles’ Heel of the large estimated quantum of the global stock (c.23.6 million oz). In this regard, the continued decline in the stocks in Europe is likely to impact the platinum price to the upside as Europe will likely seek additional platinum supplies in
two to five years. Much, however, depends on a continuous increase in the demand for platinum.

David has been associated with the South African mining industry and mining investment industry for the past 40 years (mainly PGM, gold and uranium). At present, David is working as an independent precious metal consultant.