Home News PGMs Inter-union rivalry at the root of the Marikana Massacre was masked by...
Facebook
Twitter
WhatsApp
Linkedin
Email 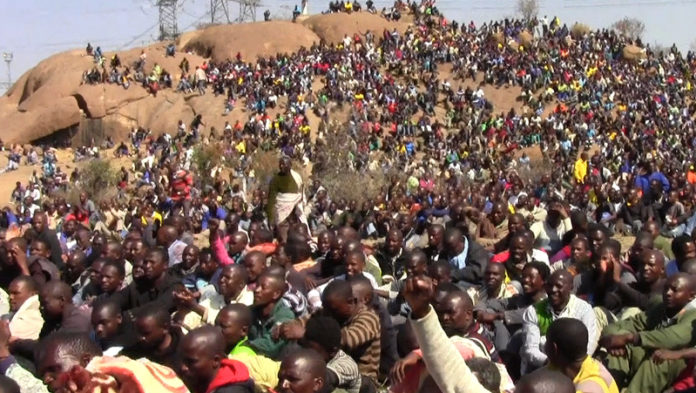 Ask Ben Magara, the former CEO of Lonmin about the Marikana massacre, in which 44 miners lost their lives in the course of inter-union violence and protest action during a week in August 2012, and that’s what you’ll hear.

Magara wasn’t at Lonmin at the time of the event, perpetrated by police services. He joined just under a year later, in July 2013. However, he remembers the atmosphere at the company as if it was yesterday. The tension and grief were palpable.

“People were distraught,” he says in an interview following conclusion of the company’s merger with Sibanye-Stillwater. “There was pain, but there was also an element of resilience in those people. At the time, Lonmin employed about 39,000 people – a major employer.

“We would talk about the week that changed our lives. We lost 44 people. It was painful; you could smell and touch the pain of the people. They needed to be picked up and moved on.”

Magara spent his first few weeks at Lonmin on the ground; visiting the facilities. In the end his efforts at saving a company where a policy of mechanisation and new project investment had led to two rights issues amid a falling platinum price, proved in vain. He had pulled every possible lever at saving the company: it wasn’t possible.

Few, if anyone, could have done better in the circumstances. At the very least, he was able to keep the company going long enough that it was able to negotiate a scheme of arrangement with Sibanye-Stillwater. Until that point, people were waiting for Lonmin “to pack up”, the way Magara describes it.

Magara, however, is certain that a major contributor to the events of Marikana laid buried in the former treatment of employees.

As with many mining firms, Lonmin had a hostel system. “There were 16 men to one hostel while the platinum industry was making money. ‘You ignored me. Now it’s my turn and I’m not giving up’,” he said, voicing the sentiment of the employees at the time.

“For me, we forgot those people and now they had given up on the company. But what they were looking for we couldn’t then give them because the platinum price was too low,” he says.

The depressed platinum price seriously harmed the company’s ability to respond to the growing discontent. But as much as the events at Lonmin’s Marikana were about the company’s past treatment of employees, it was equally the consequence of broader forces underway in the industry at the time.

In Magara’s view, the rise of the Association of Mineworkers and Construction Union (AMCU) triggered an inter-union rivalry with the then dominant National Union of Mineworkers that swung out of control within months of its first springing up in the late summer of 2012, first at the facilities of Impala Platinum Holdings (Implats) before moving to Anglo American Platinum, and then Lonmin.

And in the events after the shootings, the massacre swung in a different direction having become heavily politicised. An e-mail by Cyril Ramaphosa, South Africa’s current president and then a non-executive director of Lonmin, was intercepted. It had asked for “concomitant action” against protest action that Ramaphosa interpreted as “dastardly” and “criminal”.

“From August 9 to August 16, ten people died at the hands of the strikers,” said Magara. “That element seemed to get forgotten,” he said referring to the justified global condemnation of Marikana following the police shootings. “Marikana then moved quickly. It moved to a political issue,” he says.

Commenting on the takeover by Sibanye-Stillwater, Magara feels it was the right outcome. Lonmin had been waiting for a recovery in the platinum price that never came. The company cut staff, it then tried to sell some processing capacity, and it re-engineered the balance sheet. Prior to it buying Stillwater Mining, Sibanye Gold (as it was then called) had conducted a due diligence on Lonmin and so when the time came, the calls were made.

The merger with Sibanye-Stillwater was on.