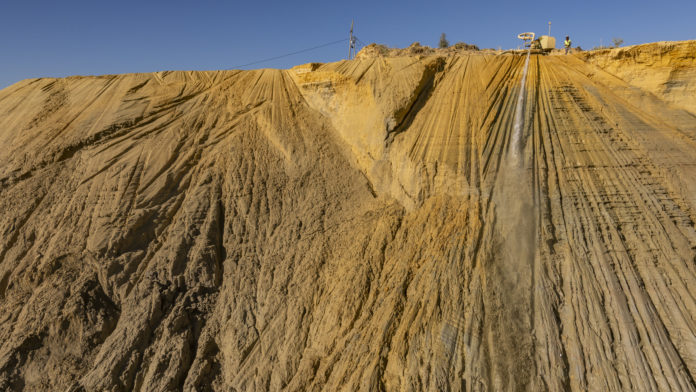 DRDGOLD said headline interim share earnings will decline between 43% and 53% owing to a year-on-year decline in the rand gold price and lower volumes from its Ergo operation.

The gold retreatment company said share earnings would be 52.5 and 63.6 cents a share for the six month period ended December 31 compared to headline earnings of 111 cents per share last year.

In addition to Ergo, a deposition site east of Johannesburg, DRDGOLD also operates the Far West Gold Recoveries (FWGR) operation near Carletonville. It bought FWGR from Sibanye-Stillwater in return for shares and an option over control which Sibanye-Stillwater exercised for R1bn in 2021. DRDGOLD is consequently 50.1% owned by Sibanye-Stillwater.

At Ergo, gold sold fell 9% in the six months to 2,296kg (about 81,000 ounces) following a decline in yield. DRDGOLD said the higher grade reserves in the Knights area of the operation had reached the end of mine life.

At FWGR, there was a 13% increase in production to 801kg (28,254 oz). Yield was up due to higher grade material being reclaimed from Driefontein 5 and improved gold bullion purities resulting from the implementation of the copper elution circuit.

In both operations, the rand gold price decline led to a fall of revenue: at Ergo revenue decreased 20% to R1.8bn while at FWGR revenue fell 2% to R693.8m. Total cash operating costs for the six month period increased 11% to R1.68bn.

Owing to strong operating performances in the last two years, and a supportive gold market, DRDGOLD remains in a good position in terms of liquidity. Cash and equivalents totalled R2.24bn as of December 31 up from R2.18bn at the close of the previous six month period on June 30. The company also has access to a R200m revolving credit facility.

DRDGOLD generated free cash flow of R406.9m in the interim compared to R759.6m in the corresponding period of the previous financial year. A dividend of R345.5m was paid. It has no debt.