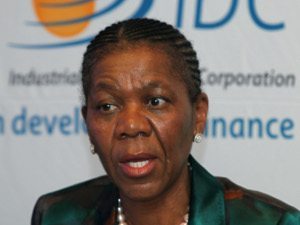 [miningmx.com] – AGAINST THE ODDS, Daphne Mashile-Nkosi has steered Kalagadi Manganese through a damaging battle between the firm’s key shareholders, and juggled growing tensions with its leading funder, the Industrial Development Corporation (IDC).

Despite the noise created by these exogenous events, Kalagadi Manganese has built a sinter plant at its underground manganese mine near Hotazel in South Africa’s Northern Cape and set down plans for a manganese smelter at Coega on the country’s east coast.

The proposed vertical integration – of miner and smelter – is a move other manganese miners are unlikely to match as they look to places further afield with fewer electricity constraints and lower energy prices. African Rainbow Minerals, for instance, opted for a smelter in Malaysia.

The reason Kalagadi did not build a smelter in the Northern Cape was because of water and electricity constraints in that province, Mashile-Nkosi said. “It was also a case of splitting the cake between two of the poorest provinces, creating jobs in both.’

The mine is a tad delayed, but the sinter plant is running on third-party material selling more than 44,000 tonnes of sintered manganese at the time of writing. The whole point of sintering the manganese is that it fetches a higher price than raw manganese ore.

It’s the kind of beneficiation the South African government loves to read about.
For Mashile-Nkosi, the achievement is remarkable given the raging battle in the background between ArcelorMittal, the Luxembourg-based group and owner of South Africa’s largest steel maker ArcelorMittal SA, and Kalahari Resources. Together the two are the largest owners of Kalagadi Manganese.

There is no doubt that tensions between the companies have eased since a bruising and public spat culminated in a court case in which ArcelorMittal’s unhappiness with Mashile-Nkosi was laid bare, and Kalahari’s dissatisfaction with the world’s biggest steel maker as a partner was made equally clear.

Kalahari is subsequently preparing funding to buy ArcelorMittal’s 50% stake in Kalagadi for R3.9bn. “I’m meeting with funders. If I had committed time, I would have bought them out, but I decided to prioritise and focus on the mine and sinter plant to get them operational,’ Mashile-Nkosi said.

“The Kalagadi board is functioning well. They are not creating all sorts of problems and they’re being a good shareholder for now and I can take them along and get what I want and not compromise the project.’

“I do have people who want to fund me. It’s only that one didn’t have time to sit down and finalise the agreements because it’s not easy,’ she said. “It’s a lot of money and they need to look at their return on their investment,’ she said, adding that the matter would be revisited around September.

Kalagadi Manganese is putting in place a funding arrangement for the construction of a smelter in the Eastern Cape, a decision that has drawn criticism from some quarters because of the cost of railing sinter to the coast rather than building the smelter next to the mine and transporting a much higher value product to the port.

Will the Industrial Development Corporation (IDC) play a role in the smelter? It’s unlikely. Mashile-Nkosi tore into the state funder for the terms of a loan it gave to Kalagadi Manganese in 2013. She heads both Kalahari and Kalagadi.

The IDC, a 10% shareholder in Kalagadi, extended a R1.05bn loan to Kalagadi Manganese at 24% interest over nine months, she said. “You can’t have a development funding institution behaving like a loan shark,’ she said.

Unsurprisingly, perhaps, there have been requests to the IDC to roll the loan over a couple of times from the original deadline of September 2013.

A second six month extension has been sought to September this year, which would bring the loan including interest to R1.8bn.

“We took a loan of R1.1bn and we’ll have to repay them back R1.8bn by September this year if it is extended by another six months. It’s not ideal for the company. Something is not right.’

Kalagadi is asking the IDC to convert the short-term loan into a longer-term facility of about 11 years with a review of the commercial terms. “It cannot continue in the current state. It will kill us,’ she said.

“The model is wrong. The IDC must be an institution that doesn’t strive to make money. They must break even, they must pay their costs. If the government is serious about industrialisation and job creation, they should support the IDC, they should penalise the IDC for making money,’ Mashile-Nkosi said.

“We find joy in working with the African Development Bank. When you work with them you feel they really want you to develop and they want to ensure industrialisation happens. The IDC doesn’t do that. They compete with commercial banks.

Even commercial banks don’t give you loans at 24%. It’s so wrong. We are trying to get Absa [one of South Africa’s big four banking institutions] to replace this loan,’ she said.

The IDC responded by saying the terms of the loan reflected the risk. “The IDC facilities were for a business in an early stage of development, with uncertainties in place, and the IDC pricing reflects this,’ said Mandla Mpangase, spokesman for the bank.

One of the terms of the loan agreement was that Mashile-Nkosi leave the company. “I had to go and fight against this. I’m not sure they understand their mandate. Of all the fights I’ve had, with ArcelorMittal, the IDC has been the worst nightmare for me.

They’ve never lifted a finger to support me. Not once,’ she said.

Said Mpangase: “It would be safe to say that without IDC support the project would not have developed to the stage it is at today.’

The African Development Bank has extended a €202m loan to Kalagadi, with €40m of that earmarked for the smelter.

“We are at the inter-creditor stage,’ Mashile-Nkosi said. This means the creditors are dividing the risk between themselves and reaching an agreement how the collateral will be split in case of default.

There’s a third party she declined to identify which will build and transfer the R6.9bn smelter. The technology for the smelter has been decided. It is proven technology, which will come with a co-generation capacity component to put between 25% and 38% of the electricity it uses into the grid. The cost of the co-generation facility will add about 2% extra to the capital expenditure at the plant.

“The third party will largely fund the smelter on its own in the build and transfer scheme,’ Mashile-Nkosi said, pointing out this would come to R6.1bn and the African Development Capital completing the funding requirements.

The smelter will use 172 megawatts (MW) and there is a saving of up to 38% of that.
“There’s been so much noise about a smelter using so much electricity and that there’s no electricity available, but there’s a sub-station nearby with 500MW,’ Mashile-Nkosi said.

The sinter plant has capacity of 3.7 million tonnes (mt). The mine will fill 3mt of that and 700,000 tonnes of capacity will come from toll treating third party material or purchased ore from smaller players, providing an extra revenue stream for the project.

The smelter will use 720,000 tonnes a year of sinter to produce 320,000 tonnes of high carbon ferro- manganese, which realises around $1,400 a tonne. The balance of the sinter would be sold on the market.

Allan Seccombe is the senior mining writer for Business Day. He was commissioned by Miningmx to write this article for The Mining Yearbook, distributed with the Financial Mail.