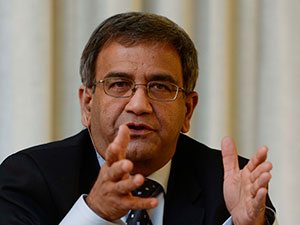 [miningmx.com] – ANGLOGOLD Ashanti CEO, Srinivasan Venkatakrishnan is a chartered accountant who got involved in gold mining because he wanted to “get his fingers dirty’, which he achieved in 1999 when he was parachuted into Ghana by accounting firm Deloitte in London to help the former Ashanti Goldfields out of a near-fatal financial mess.

“Be careful what you wish for, lest it come true’ runs the proverb and, right now, Venkat is up to his elbows in dirt as he fights to turn AngloGold Ashanti around, while facing up to what could become the biggest labour crisis in the South African gold industry since the 1986 general strike.

At the same time, he is trying to maintain good relations with a number of important institutional shareholders who would dearly love him to get out of South Africa completely – as BHP Billiton has just done through the South32 demerger – and focus solely on the group’s foreign operations.

As Miningmx reader Goldminer put it bluntly in a post to a recent article on AngloGold Ashanti: “Venkat, let’s be serious… the unions are not going to go for it. Please divest from South Africa so we can again invest in your company.’

But serious is precisely how Venkat comes across; more so than predecessor Mark Cutifani, whose shoes Venkat stepped in to fill from his former position of CFO in May 2013 when Cutifani was appointed CEO of Anglo American.

To outsiders such as this journalist, he’s tougher, blunter and more prepared to spell things out than Cutifani. Venkat does not see it that way, but he does concede that, in terms of his management style, he will consult widely up to a point, but there comes a stage at which he takes a decision and “that’s it’.

“Sometimes you have to make that call – the CEOs call or the CEOs prerogative, if you like. You are not going to be popular with the team, but it’s a call that needs to be made.’

That’s realistic language from a man who admitted earlier this year in an interview with the Financial Times that he was not sure that he wanted to have the top job at AngloGold after Cutifani unexpectedly announced he was moving on.

Venkat tells Miningmx that “the top job was never on my radar screen. A number of things made me change my mind, the most important of which was the level of support I received from the operating team, which took me pleasantly by surprise.

“The three top operating executives called me to say: “Hey Venkat, you know this business backwards. Take it on and we will back you to the hilt.’ That was very important to me as an internal candidate for the post.’

“At that time we were dealing with a sharp downturn in the gold price, and we did not have the time to bring someone else in, let him get up to speed and then take it on. AngloGold needed someone upfront who knew the business really well.’

But, having taken it on, Venkat has demonstrated his mettle in dealing with a series of issues at AngloGold Ashanti which should have been tackled a lot earlier. The most notable of these has been the closure of the Obuasi gold mine in Ghana, pending a complete review of its future.

“I do not belong to the camp that says you should employ a bunch of “yes’ individuals. I encourage open debate in the management team because you need to have someone on your team with the courage to say “hey emperor – you are not wearing any clothes’ before you go out on to the balcony.

“I do have a heart, but I can be tough when it comes to making decisions; tough but fair. I do believe in a sense of fair play, but also that it makes no sense to postpone the inevitable.’

That approach, which it seems is finally being adopted by South Africa’s other major gold producers as well, is what could make this year’s wage negotiations so confrontational because there is an inevitable outcome looming if a suitable deal is not reached.

The gold producers have signalled that a crisis point has been reached and that they want to negotiate an “economic and social compact’ with the unions aimed at preserving jobs and sustaining the economic lives of the mines under the current grim gold price scenario.

The unions have responded, so far, with their usual demands for wage increases ranging from 85% upwards; apparently secure in their belief that they will, as they have for the past decade, win wage increases well above South Africa’s ruling inflation rates.

The inevitable in this case is going to be a spate of closures of non-profitable shafts and heavy retrenchments, but that is an outcome that the union leadership apparently refuses to countenance or link to the pay negotiations.

Says Venkat: “What we cannot have is year-on-year discussions around wages without any economic consequences. That dialogue has to change. There is a trade-off between wage increases and employment numbers and we want to bring that into the dialogue upfront.

“This has been an issue for quite a while and what we have seen is a paradigm shift in terms of South African operating costs. With the benefit of hindsight this should have been done a few years ago, but it’s never too late to start.’

Says Venkat, when asked just how realistic the prospects were of achieving this: “I will not rule out getting a deal. We have spoken to our workforce and we have seen the concerns they have.

ON the corporate front, Venkat is fighting two battles: finding an acceptable way of splitting the group, while negotiating with the ruling ANC government to establish a sustainable and co-operative working environment for the South African gold mines – which will reduce the high level of risk currently perceived by both foreign and domestic investors.

The two issues are linked because it’s the uncertainty and perceptions of high investor risk which are fuelling the pressure on Venkat to separate AngloGold’s South African mines from the others.

Venkat comments: “I think the ANC takes a positive long-term view on the role of the mining industry. My only wish is that we could manage the short- and medium-term challenges working collectively as a team.

“It’s a question of dialogue which starts with the robust debate we are currently having, although the fact that this debate is taking place is enough to make people quite nervous.’

He rejects the viewpoint that the ANC has it in for the country’s mining industry from an ideological point of view because of so-called “legacy’ issues and that this is thwarting attempts to negotiate a unified approach.

I do have a heart, but I can be tough when it comes to making decisions; tough but fair. I do believe in a sense of fair play

“I have not seen a deep-rooted hatred towards mining companies because, if you had seen that, then the dialogue would have gone in a completely different direction, in my view.’

“The city was created out of mining and it’s still standing. You cannot find this anywhere else in the world.’

TO SPLIT OR NOT TO SPLIT

In September last year, Venkat was forced to drop a proposed split of AngloGold into South African and foreign operations when it was rejected by the group’s major institutional shareholders because it also involved a $2.1bn (R25.9bn) rights issue. The proposal was described as “value destructive’ by John Paulson whose hedge fund owned 6.6% of AngloGold.

The group was widely criticised at the time for the way it had handled the deal – without consulting key shareholders beforehand – but Venkat defends the strategy, saying that AngloGold had taken the morale high-ground from a corporate governance point of view.

“We had two options. We could have “wall crossed’ [advised key shareholders in advance on the deal by taking them into confidence on condition they took no action], and then gone ahead with an announcement by saying this is the deal we are implementing.

“Or, we could have treated all shareholders the same by announcing: “This is what we want to do, this is what the proposed deal looks like, and we want to consult with you on it’.

I am going to hedge my bets on how we would approach any future split. That’s a hypothetical question and it would depend on the nature of the transaction

“The second option does not differentiate between shareholders and we believed from a governance point of view that it was the correct way to go. We consulted and it quickly became pretty clear the capital raise was not going to be backed by shareholders and that’s why we took it off the table.

“We clearly stated shareholders had a right to vote on it and a 75% vote was needed. They all knew that. It was not presented as a done deal.’

The problem, however, was that market traders did view it as a done deal and promptly dumped the shares because of the widespread negative response. As of end-September, when AngloGold Ashanti announced that it was pulling the proposal, the stock was some 15% down on where it was when the proposal was announced earlier that month, although it has since recovered.

The issue was the debt in the foreign companies domiciled outside of South Africa, which would not be able to rely on the group’s South African balance sheet through cross-guarantees.

Says Venkat: “The international entity had to stand on its own two feet and that’s what created the need for the capital ask, and it was the capital ask that came as a surprise.’

So, what happens next? Will the corporate split be revisited and, if so, how will AngloGold approach its shareholders next time?

Venkat replies cautiously that “a split is not a priority, but never say never. I am going to hedge my bets on how we would approach any future split. That’s a hypothetical question and it would depend on the nature of the transaction.’

Venkat says that management’s priority is to get the basics of the business right. “We need to be able to demonstrate tangible growth coming from a quality portfolio and eventually putting dividends back on the table.’

He reckons that AngloGold is getting there after reporting a string of quarterly reports showing consistently improving operating results. “The numbers speak for themselves on the physical KPIs [key performance indicators] such as tons hoisted, grade and recoveries.’

Not bad for an organisation run by a bean counter, a description Venkat objects to strongly, pointing to his now extensive expertise in gold mining. “Along with that experience comes my grasp on risk and opportunity analysis, while I also come with a healthy scepticism, something the mining industry needs at times.

“I do not hesitate to ask “dumb’ questions because often dumb questions are the most difficult ones to answer. If I don’t believe I have the right answer, I keep probing and following my nose. People know that if I am not comfortable with something, I do not let go of it.

“I am like a dog with a bone. I keep going back until I am satisfied that the answer is correct and, if I am not satisfied, I will call in internal and external help.’