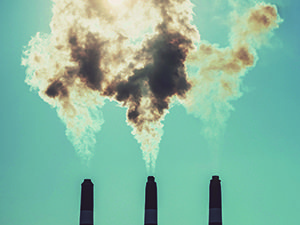 But National Treasury is resolute on continuing with punitive measures to curb carbon emissions, and a draft carbon tax bill would be introduced later this year to allow for more public consultation.

If things go according to plan, a carbon tax will be in store for South Africa from the latter part of 2016, despite opposition and warnings from the business sector.

According to the Carbon Tax Policy Paper that was published two years ago, a tax of R120 per ton of carbon dioxide-equivalent is proposed, with a 60% tax-free emissions threshold and some exemptions for heavy emitters, but this could change when a new policy document sees the light.

The prudency of a carbon tax is one of the matters which a tax committee, headed by Judge Dennis Davis, is investigating, and heavy energy using companies, such as the mining industry, are now hopeful that this body will advise Treasury against it.

Economists, energy experts and the Chamber of Mines, were among the parties who submitted papers expressing their views on carbon tax.

One of the most vocal critics of carbon tax is senior economist Rob Jeffrey, managing director at Econometrix. Jeffrey was the author of a report on the potentially negative economic impact carbon tax and the overuse of alternative energy sources could have on developing countries.

“The potential damage it could do to our economy is so substantial and overwhelming that the strongest possible recommendation is to cancel it altogether. There is no need for South Africa to lead the pack and expose our economy to the potentially serious damage and deprivation,’ Jeffrey says.

In the Econometrix report, Jeffrey argues that carbon tax would slow South Africa’s GDP growth by 0.4% per year, which would result in a reduction of 6.5% in the size of our economy by 2030 – which amounts to R1.4tr less than what could be achieved.

The best strategy to grow South Africa’s GDP and employment figures is to focus on strengthening our mining and manufacturing industries, says Jeffrey, as these sectors can employ considerably more people. “Carbon tax and higher prices of the large input costs increases from electricity price increases run contrary to South Africa’s own beneficiation policies.’

It would be futile for South Africa to even consider carbon tax, or any other envisioned carbon tax-trading scheme, says Jeffrey, as such schemes failed in Europe and elsewhere. Any major decline in the growth of carbon emissions in industrialising countries, such as India and China, in the period up to 2030, is highly unlikely, he says.

“South Africa’s likely contribution to any reduction in carbon emissions will be less than measurable, while the rest of the world is flagrantly disregarding the same set of rules. Australia, one of South Africa’s key global competitors in the mining sector, has scrapped plans to introduce a carbon tax scheme.’

The mining industry has also voiced its disagreement with a carbon tax. In a submission made to the Davis Tax Committee, Roger Baxter in his capacity as CEO of the Chamber of Mines says that mining is an important contributor to GDP, and a carbon tax will seriously curb the industry’s ability to contribute to economic growth and transformation.

A carbon tax will further increase the costs of electricity that has increased with almost 300% in seven years.

Mines, especially deep-level platinum and gold mines, are by nature electricity-intensive and are users of base-load electricity supply. Electricity accounts for more than 20% of mines’ production costs and there are currently no substitutes for electricity as an energy source.

“Increases in input costs [such as electricity] undermine the viability of mines and would be even more devastating on marginal mines where there is limited grade flexibility,’ says Baxter.

Shaun Nel, project director at the Energy Intensive User Group of Southern Africa (EIUG) says that it could add another 5c to the electricity price at a minimum. “A carbon tax will have a completely negative impact on business growth and we may see certain businesses actually shutting down.’

Econometrix estimates that the mining industry’s revenue could be between 3.5% and 5% lower than expected, should a carbon tax realise. “This could amount to R16bn less and 50 000 fewer jobs in an industry that is already shedding jobs,’ Jeffrey says.

But Cecil Morden, National Treasury’s chief director for economic and tax analysis, is of the view that South Africa has no other choice, but to implement a carbon tax.

“South Africa is a signatory to the Kyoto Protocol, but more importantly the United Nations Framework Convention on Climate Change [UNFCCC] and it’s in everybody’s interest that we make sure there’s a collective effort to address climate change.

“We need to take small steps at an early stage rather than having to do too much when the situation calls for it.’

He rejects the argument that South Africa will have a miniscule impact on global carbon emissions. “Countries, such as China, the United States and India have higher populations, growth rates and carbon emissions, but that doesn’t mean South Africa is not in an uncomfortable space – our energy mix is pretty dirty.’

He also doesn’t believe that Australia has necessarily abandoned their commitment to the UNFCCC process.

“Australia has done a lot of work in this area and they’ve introduced a carbon tax, although the current politicians have gone a different route.

“They now have other mechanisms in place in an attempt to mitigate carbon emissions. Whether that is more effective than a carbon tax is still up for debate.’

The decision to implement a carbon tax appears to be informed by a need to raise additional taxes, says Kaizer Nyatsumba, CEO of the Steel and Engineering Industries Federation of South Africa (SEIFSA).

“It runs contrary to government’s stated desire to create jobs. It’s both short-sighted and extremely prejudicial to the local economy, especially manufacturers,’ he says.

Nyatsumba questions South Africa’s “obsession’ to be among the first countries in the world to impose carbon taxes. “Our economy has been seriously under-performing for a number of years now and needs all the support that it can get from the government, and not more short-sighted policies to hobble it further.’

The EIUG’s Nel holds the same view and rejects National Treasury’s “green’ argument.
“This is a cynical attempt to extract additional revenue.

“There can be no behavoural change unless Eskom’s energy mix changes and that can only be done by government decree and the Integrated Resource Plan [IRP] for electricity.’

National Treasury also needs to decide on which pricing mechanism it wants to use for carbon tax – will there be a cap on emissions per company, or are we going to have a carbon tax. You can’t have two competing mechanisms,’ says Nel.

He doubts that National Treasury has the full support of their colleagues in the other economic clusters of cabinet.

“Treasury seems very committed to carbon tax, but the departments of mineral resources, economic development, trade and industry and energy realise this will have a significantly negative impact on the economy. Treasury needs to realise carbon tax is not a policy that has been adopted at cabinet level yet.’