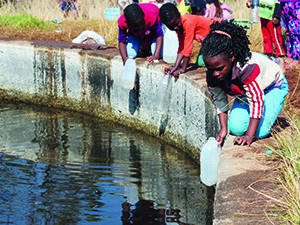 [miningmx.com] – NEARLY two years after Village Main Reef pulled the plug on Blyvooruitzicht mine near Carletonville, liquidators are hopeful that 1,700 former workers will eventually receive the roughly R30m they are still owed.

An amount of R10m was paid to workers in December, and further asset sales are expected to bring in enough cash to cover ongoing costs and pay preferential creditors, mainly workers, liquidator Leigh Roering said. Blyvoor had outstanding liabilities of R849m when it went into liquidation at the end of July 2013.

Similar to the liquidation of Pamodzi Gold in 2009, the Blyvoor liquidation has been marred by asset-stripping, the flooding of potentially viable shafts, the theft of gold-bearing material, environmental degradation and the destruction of property – damage to the gold plant alone was estimated at R30m.

In the case of Blyvoor, battles between groups of zama zamas (illegal miners) and security guards also led to more than 40 deaths.

While the security situation has improved significantly in recent months, living conditions for former employees are dire.

Infrastructure like copper cables and water pipes have been stripped and sold off as scrap metal. Water supply to Blyvoor Village, with an estimated population of 15,000, was cut off by the local municipality in May, prompting human rights lawyers to start legal proceedings in June in an attempt to restore supply.

During a visit by Miningmx in mid-May, people were already without running water for more than a week and were forced to use stagnant water from a small dam for washing and other purposes.

“This is worse than living in the rural areas,’ said Vuyelwa Lubonza, a Blyvoor resident. “At least in the rural areas you know where the water is coming from and if it’s safe to use. Some people say this water comes from the shaft and that it is poisonous, but we have no other choice.’

Another Blyvoor employee, who worked at the mine for 33 years until its closure in 2013, said that the municipality cut off the water to force people to move out of Blyvoor.

“They’re treating us like animals. They know we can’t survive here without water, and they want us to leave so the village can be redeveloped. I’m 53 now; I can’t find a job anywhere else. I have nowhere else to go.’

Blyvoor Village was bought by a property developer from Rustenburg, with the provision that the land is reclassified as a township (it is currently treated as farmland). In the interim, the developer was given some rock dumps to earn an income to cover Blyvoor-related costs like electricity.

The gold plant, initially seen as Blyvoor’s most attractive asset, has also been sold and a part of it is currently being demolished. According to Roering, the new owners plan to redevelop a part of the CIL (carbon in leach) plant.

The focus is now on solving the socioeconomic challenges related to Blyvoor Village and selling Blyvoor’s “substantial surface assets’, Roering said. These include slimes dams, gold-bearing rock and aggregate.

The paltry expected proceeds from the asset sales show the extent of the property destruction at Blyvoor.

DRDGold’s 74% stake in Blyvoor was bought out of business rescue for R150m in February 2012.

At the time, Village planned to increase output by 30% to 54,000 oz a year, with a projected life of mine until at least 2030 – a dream that was largely laid to rest by an underground earthquake that destroyed viable panels, an unprotected strike and a drop in gold prices.

After Village pulled the plug on 31 July 2013, the liquidators sold Blyvoor’s mining assets in December that year to Goldrich Holdings, a shadowy company with links to Aurora Empowerment Systems, for R70m.

After they repeatedly failed to come up with the cash, a lengthy battle with liquidators ensued. Goldrich and the liquidators finally settled in September last year, paving the way to find new buyers for Blyvoor’s assets.

Goldrich was run by Thulani Ngubane and Fazel Bhana, who were also involved with Aurora Empowerment Systems, the preferred bidder of Pamodzi.

“We’ve had undue delays with people coming and making promises of major offers to buy all the infrastructure and to get mining again; this has just slowed the process,’ Roering said. Following the Goldrich debacle, the liquidators are now more careful in weighing potential buyers. “It’s a case of once bitten, twice shy.’