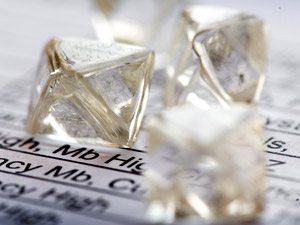 [miningmx.com] – BOTSWANA is regularly held up as an African success story because of its political and economic stability, a multi-party democracy and good human rights records.

It has also had the benefit of spectacular diamond deposits, the revenue from which has been poured into social development. The stones have also been a major factor in Botswana, having one of the highest per-capita growth rates in the world.

In the past decade, the gross domestic product (GDP) has grown at an average of 4.6%, although stubborn pockets of poverty continue in parts of the country, which has a population of just two million.

But the ominous prediction that the country’s diamond deposits will last about another two decades means that this kind of trajectory is unlikely to continue.

The stones, which contribute to around 30% of Botswana’s GDP, began to filter into the economy in the Seventies, when Anglo American’s De Beers set-up shop at some of the richest diamond deposits in the world.

But its overweight reliance on diamonds means that Botswana is especially vulnerable to resources shocks. In 2013, the country’s GDP reached 5.8%, pushed up precariously by the mining sector which registered a staggering 10.6% as demand for diamonds from China and India soared.

But as growth in the west, and in emerging economies like China and India, reins in – increasingly tightening liquidity – Botswana is taking a hit.

At the end of May, state-owned Okavango Diamond Company (ODC) announced that it had sold 20% less stock than it had in the same period last year. ODC owns the Debswana Diamond Company in a joint venture with De Beers, producing about 30% of world output by value from four mines.

Rough diamond prices fell 6.9% in the last quarter of 2014, the biggest quarterly decline in more than two years. A further 1.2% contraction came in the first three months of 2015, pushing the company to trim production in its tailings operation at its Jwaneng diamond mine.

The slowdown in resource prices has also finally felled copper and nickel producer African Copper, which delisted from the London Stock Exchange and the Botswana Stock Exchange in August.

The company was rescued from collapse after the 2008 recession-induced commodity price crash saw its flagship Mowana mine placed on care and maintenance for nine months.

JSE-listed Zambian Copper Investments took over 84% of the company and has bailed it out since to the tune of $65m (R817m). In April, it announced that it was considering divesting, at least partially, from the African Copper.

In an effort to move away from a reliance on diamonds, Botswana launched a series of ambitious projects when the price of resources went stratospheric in 2010 and 2011.

The coal price, which peaked in 2010 and 2011 as China and India powered ahead with spectacular growth, kicked off an especially heady series of projects and spurred efforts to diversify mining activities.

One of the biggest projects to be mooted in 2010 was the 1,600km Trans-Kalahari railway line which was to be developed with Namibia. The line is being planned to run from the Mmamabula coalfields bordering on South Africa’s Waterberg coalfields, to Walvis Bay in Namibia.

The railway line would create a desperately needed link to the world market and enable the country to benefit from its coal deposits, which the department of energy estimates to be in the region of 212 billion tonnes.

However, at the current coal price of around $46 (R578) a tonne, experts say that the project is “non-viable’.

In December, Australia-based Trans-Kalahari railway line consultants Aurecon said in its risk assessment of the project that with the “principal driver for the project is the commercial viability of export coal. [and a] low coal price [would render it a] non-viable project’.

However, the drawback of coal’s current prices could be offset by copper resources, manganese ore, and other mineral resources along the rail corridor in Namibia.

Steven Kuo, Africa Analyst at Control Risks SA, says that another potential pitfall was that Walvis Bay, which is not a natural deep-water port, would require dredging to facilitate large volumes of coal exports. He says that this “… would add roughly six days to shipping costs en route to India, which is likely the main market’.

Bruce Dickinson, an Africa analyst at Webber Wentzel, says that the stability of the environment makes it attractive for lenders, but the strong pula – currently trading at R1.20 – could work against it.

Aurecon is finalising possibilities for route and gauge which will affect the final price of the project, currently estimated to be in the region of $14bn (R194bn).

In an effort to increase its use of local coal supplies and reduce its dependence on Eskom, where it was getting 80% of its power, Botswana erected the 600MW Morupule B Power Station. The tender for the plant, positioned near the existing Morupule Power Station, went to the China National Electric Equipment Corporation.

Morupule B was beset with problems from the beginning. Costs were initially pushed up by the delays and once it was running, boiler failures closed down units – until by October, it had collapsed altogether. By May, three units were back in operation, albeit producing less than their intended 150MW.

According to Kuo at Control Risks, the operation is currently being audited to address “contractual matters on operation and maintenance’.

In the meantime though, the government fired the CNEEC and hired German company STEAG Energy Services to detect and fix the problems.

The beleaguered project has cost tax payers an estimated $1.1bn (R15.2bn), making it the most expensive project ever undertaken in the country.

Still, even when diamonds do start to run dry, Botswana could still offer downstream diamond services.

With a long history of the beneficiation in terms cutting, polishing, setting and selling, the industry is likely to continue to provide at least some revenue.